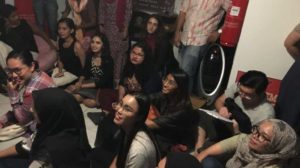 The APC Women’s Rights Programme (APC WRP) drafted changes to the TBTT campaign kit in 2017 and tested a new monitoring and evaluation form for local campaigns during the annual 16 Days of Activism Against Gender-Based Violence. This effectively encouraged more local campaigns to report impact and capture stronger results, especially through brief stories of change around campaign capacity and understanding of the dynamics of gender-based violence.

The Take Back the Tech! game, which is in development, was piloted at several events in order to test it and receive feedback from peer groups, such as a meeting by Safe Sister trainers in Kenya, the APC global members meeting in South Africa, trainings in Mexico with adolescents, teachers and women human rights defenders (WHRDs), and in the Philippines with WHRDs, as well as at a workshop at the Internet Freedom Festival 2017 in Valencia, Spain.

To watch out for: The TBTT game will be officially launched in 2018, so stay around to play with us!

Image: Audience members enjoying a story at EMPOWER’s Living Library for the Take Back the Tech! campaign in 2017.