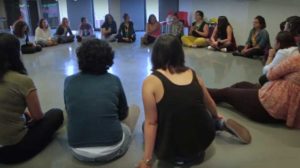 During 2017, APC engaged in intense advocacy work to bring the Feminist Principles of the Internet (FPIs) to women’s rights and sexual rights activists, as well as internet rights activists, around the world, to promote their uptake and adaptation to local realities. The main channel to develop this was through the convening of five city conversations in different countries that reached 112 activists.

In addition, the FPIs platform was updated in 2017 to further increase outreach and engagement, through the addition of new content as well as re-organising and animating the platform.

To watch out for: Stay tuned for a Feminist Principles of the Internet engagement kit containing visuals, audio, banners and social media products to be developed and used by several organisations and media, and a re-designed FPIs platform.

Image: Screenshot of the video “Tenemos derecho a navegar seguras en internet” of the city conversation in Mexico.