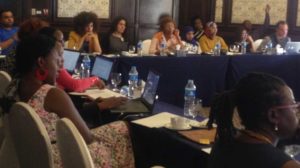 Throughout 2017, APC supported and facilitated the participation of 67 civil society organisations and actors from the global South to meaningfully and effectively engage with internet governance processes.

This was achieved through capacity-building initiatives like the African School on Internet Governance (AfriSIG) and APC’s IGF Academy project, where 34 civil society activists, journalists, lawyers and members of the technical community learned to engage meaningfully with regional and global internet governance processes and issues.

APC, in partnership with iRights, organised a capacity-building workshop as part of the IGF Academy in Windhoek, Namibia, on 15-17 July 2017, which was attended by 15 participants from Togo, Namibia, South Africa and the Republic of Congo.

In addition to the 19 participants from 10 countries who attended AfriSIG, a Gender and Internet Governance eXchange was held as part of the School in November 2017, with women’s rights activists from Uganda and South Africa who later participated in the African IGF.

To watch out for: In 2018 we will continue building capacities among civil society for advocacy in internet governance processes.