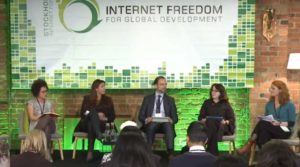 Another key moment in APC’s advocacy took place on 13 March at the 61st session of the Commission on the Status of Women. APC participated along with UN Special Rapporteur on the promotion and protection of the right to freedom of opinion and expression David Kaye and Malaysian human rights lawyer Zarizana Abdul Aziz in a parallel event on online gender-based violence and accountability of states and the private sector.

APC also participated in the World Association for Christian Communications’ Gender and Media Consultation on 9-11 March 2017 in New York, with a presentation during a panel on gender and communication policies since the World Summit on the information Society (WSIS). The UN General Secretary adopted this input, which would later be published in a resolution adopted during the 62nd session of the Commission on the Status of Women.

Another highlight was APC’s participation in the panel “Gender-based violence online: Levelling the discussion” at the Stockholm Internet Forum 2017 in May.

At the regional level, APC participated in the Latin American and Caribbean Internet Governance Forum in July 2017 in Panama, in a panel discussion of public policies on online violence against women.

To watch out for: The HRC will discuss prevention of and responses to violence against women and girls in digital contexts in 2018, and this is expected to result in further advances.