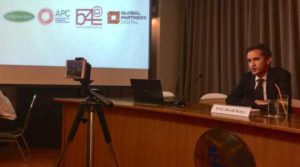 APC’s research, advocacy and capacity-building work contributed to increased understanding among civil society, human rights defenders and development practitioners of the threat of censorship and criminalisation of political, religious and sexual expression in Asia.

This increased capacity was a result of two joint submissions at the Human Rights Council 2017 sessions, and several publications produced as part of the Advocacy for Change through Technology in India, Malaysia and Pakistan (IMPACT) project, implemented in partnership with the Digital Empowerment Foundation from India, EMPOWER from Malaysia and Bytes for All, Pakistan. The research produced through the IMPACT project provided evidence and analysis of trends in Asia.

One of the main outputs was APC’s regional mapping of laws impacting the internet, titled “Unshackling Expression”, which was released as a special edition of Global Information Society Watch, and covers laws in six countries: India, Pakistan, Malaysia, Myanmar, Thailand and Cambodia.

Another relevant publication, APC’s regional research paper on freedom of expression in the context of religion online, “Let the mob do the job: How proponents of hatred are threatening freedom of expression and religion online in Asia”, expands the scope of the analysis on hate speech to suggest a multi-layered analysis that considers political, economic and social structures, the impact of inequalities in societies and individual agency.

APC and our IMPACT project partners also published country research papers on the state of freedom of expression, freedom of information, and freedom of assembly and association online in India, Malaysia and Pakistan.

To broaden advocacy in Asia, APC, Global Partners Digital, FORUM-ASIA and Bytes for All Pakistan brought together 50 civil society groups from across the region for a two-and-a-half-day gathering in October in Bangkok, Thailand. They were joined by David Kaye, the UN Special Rapporteur on the promotion and protection of the right to freedom of opinion and expression, who, in his keynote address, outlined some of the main intersections that characterise the digital and human rights landscapes. Participants also had the opportunity to share their views and input first hand into Kaye’s 2018 annual report to the UN Human Rights Council, which will be focused on content regulation.

To watch out for: APC will develop further capacity-building spaces for NHRIs in Asia. And look out for the illustrated summary of the report on online content regulation by the Special Rapporteur on the promotion and protection of the right to freedom of opinion and expression that APC will produce.

Image: David Kaye, UN Special Rapporteur on freedom of expression and opinion during the State of the Internet event in Bangkok. Source: Twitter.