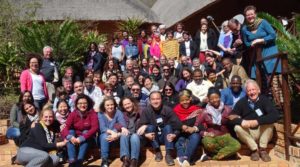 “We are like a tree, with our members and network being branches that give off this fruit which seeds and grows new trees in the community.” (Mentioned during group work)

Getting all of APC’s members together is an opportunity to celebrate the work that has been done and strategise around the work still ahead. After APC’s last member meeting in Barcelona, Spain, in 2014, the APC network met again from 18 to 21 August in Ithala, South Africa, gathering 34 of APC’s 55 member organisations, as well as one individual member.

On 18 August, the first day of the member meeting, the participants joined together to discuss APC’s direction as a community, framed within APC’s strategic plan for 2016-2019, and our identity. The highlight of the second day of the meeting was when APC members and APC staff shared information about their projects and activities in what was called the “Museum of Moments”, while the third day featured sessions on networking and capacity building. The fourth and last day was the APC Council business day, when the APC Board of Directors and Executive Director Chat Garcia Ramilo reported back on different issues, including an overview of the implementation of the strategic plan to date, a discussion of APC policies, an overview of APC finances for the period 2014-2016, and reports on membership, grants and participation and collaboration.

During this four-day gathering, a total of 70 APC members and staff reviewed, discussed and renewed their commitment to APC’s theory of change and strategic priorities that guide our work through 2019.

Before and after this global member meeting, 11 smaller member meetings were organised alongside events attended by APC members, among them the Internet Freedom Festival in Valencia, RightsCon in Brussels, the Summit on Community Networks in Nairobi, the WSIS Forum in Geneva, the Stockholm Internet Forum in Stockholm, the Forum on Internet Freedom in Africa in Johannesburg, the COCONET Southeast Asia Digital Rights Camp in Yogjakarta, the Asia-Pacific Regional IGF in Bangkok, the Latin American and Caribbean IGF in Panama City, and the Nonprofit Software Development Summit in San Francisco. A brief meeting was also organised during the global IGF in Geneva. In addition, a meeting of five European members was held in January 2017 through support from APC’s Member Exchange and Travel Fund, alongside the eSociety.mk conference in Macedonia. This represents a significantly higher number of member gatherings than in previous years.

To watch out for: APC will host regional member meetings in 2018 that will strengthen and bring together our members around the crucial priorities in every region. Stay tuned as well for a new strategy and membership criteria to be completed in 2018.