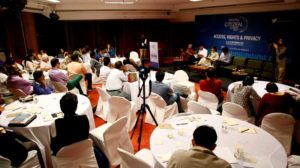 As in previous years, APC had active member involvement and collaboration in developing and implementing APC’s Theory of Change and strategic plan, with initiatives that contributed to building and strengthening cross-movement networks across the wider APC community and broader civil society engaged in internet policy, practice and development.

In 2017, APC partnered with members on organising several events, such as the Forum on Internet Freedom in Africa (FIFAfrica) 2017 (together with CIPESA from Uganda), the COCONET Southeast Asia Digital Rights Camp (together with EngageMedia from Indonesia) and the Digital Citizen Summit (together with Digital Empowerment Foundation from India).

In relation to APC’s strategic area of work on access, two members were involved in the Local Access Networks project, Colnodo from Colombia and AlterMundi from Argentina, with Mexico-based member organisation Rhizomatica as one of the partners in the implementation of the project.

In the rights field, APC supported submissions by EMPOWER, Colnodo and One World Platform to the thematic report on online gender-based violence by the UN Special Rapporteur on violence against women.

Together with its members, APC engaged in the Dynamic Spectrum Alliance, Human Rights Council processes, Universal Periodic Reviews, Human Rights Committee reviews, submissions to the Committee on Economic, Social and Cultural Rights, ICANN, the UN Working Group on Enhanced Cooperation, the preparation of regional and global Internet Governance Forums and others.

To name just a few specific collaborations during the global IGF, Point of View from India and EMPOWER from Malaysia participated in the Best Practice Forum on Gender and Access, and Point of View and Foundation for Media Alternatives representatives were active members of the Gender Dynamic Coalition.

Specifically with Chilean member Derechos Digitales, APC participated in the Internet Is Ours Coalition.

In the strategic area of making a feminist internet, 17 members engaged in the 2017 Take Back the Tech! campaign, and a representative from APC member Derechos Digitales participated in the Making a Feminist Internet meeting in October 2017 in Malaysia.

In relation to governance, two APC members were involved in the African School on Internet Governance (AfriSIG), and APC supported the participation of feminist activists in panels at FIFAFrica 2017 in Johannesburg, South Africa, while 26 members participated in the 2017 Global Information Society Watch edition.

Finally, 14 APC members joined the Alternative Infrastructure Initiative, which was jointly initiated in 2017 by Riseup, Aspiration Tech and APC.

To watch out for: We expect collaboration within APC to continue flourishing in 2018. The next round of APC subgrant support will specifically focus on collaborative projects in which several members are involved. Face-to-face planning during the five regional meetings to be held in 2018 will boost collaboration on the regional level, and some of APC’s key initiatives that promote member collaboration will continue in 2018 (GISWatch, the Local Access Networks project, the Take Back the Tech! campaign, collaboration in the area of sustainable technologies and others).