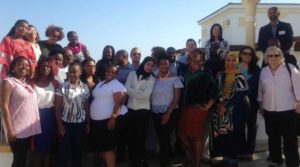 Since 2013, the African School on Internet Governance (AfriSIG) has aimed to give Africans from diverse sectors and stakeholder groups the opportunity to gain knowledge, experience and confidence to participate effectively in internet governance processes and debates nationally, regionally and globally.

At the World Summit on the Information Society (WSIS) Forum held in June 2017 in Geneva, APC contributed to the realisation of a side event on capacity building in internet governance, based on the experience it has gained through AfriSIG.

Later in the year, APC and the African Union Commission (AUC) co-organised the fifth edition of AfriSIG, held from 28 November to 2 December in Sharm El Sheikh, Egypt, with 19 participants from 10 countries. As in every edition, it brought together people of all ages, and with a wide range of experience, and contributed to increasing the diversity, extent, quality and influence of African participation in internet governance by creating a space that promotes multistakeholder learning and dialogue. Read the blog posts written by the 2017 AfriSIG alumni here.

Aside from the success of the fifth School and a revamped website that better reflects how this initiative is positively changing the internet governance landscape in Africa year after year, 2017 was a year of international recognition for AfriSIG, in the form of the 2017 World Summit on the Information Society (WSIS) Prize from the International Telecommunication Union (ITU). The award to AfriSIG, which was selected out of 345 nominated ICT success stories, was received on behalf of APC and the NEPAD Agency by Anriette Esterhuysen, APC’s director of global policy and strategy, from ITU Secretary-General Houlin Zhao at the awards ceremony on 12 June, during the annual WSIS Forum 2017. APC and the NEPAD Agency thank the ITU for this recognition and also extend their thanks to the people who voted for the initiative and who have made AfriSIG possible since 2013.

To watch out for: The sixth School will take place in Tanzania and gather dozens of participants. In 2018 APC will also publish an AfriSIG tracer study that covers the first four Schools (2013, 2014, 2015 and 2016).