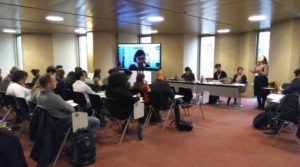 The internet exists thanks to the work of many women who have been rendered invisible, shut out from spaces of power and also subjected to violence. Different organisations around the world have attempted to respond to, fight back against and change this reality. Derechos Digitales has learned a lot from them, and just over a year ago, they began to develop a strategy to join the cause. They want to construct an internet that is safe and inclusive at every level; they want to make another internet.

From the Latin American feminist movement, Derechos Digitales has learned that together we are stronger: we can help each other, support each other, teach each other and respond. As an organisation that defends human rights and the public interest, their work consists of promoting and strengthening a community of women and feminists working at the different levels of the digital ecosystem in Latin America. How? By getting to know them, promoting their work, mapping their efforts and fostering contact between them.

Feminist servers with policies that zealously protect our privacy; women teaching and learning programming languages; geolocalising open data; developing apps to disseminate information and assist victims of domestic, social or institutional violence. Organisations that develop methodologies to raise awareness and promote adoption of safe internet use practices; journalists, editors and storytellers working to share our stories. All of us together are building this internet we dream of, and many of them are in the 2017 report, Latin America in a Glimpse: Gender, feminism and the internet, produced with the support of an APC subgrant.