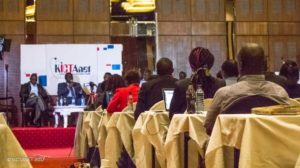 The last two general elections in Kenya have had heavy deployment of technology to improve transparency, efficiency and accountability in the electoral process. During the 2017 general elections, the Kenya ICT Action Network (KICTANet) observed the use of information and telecommunications technologies (ICTs) before, during and after election day. The network focused on digital rights such as privacy rights during the electronic voter registration process and access to election information by the citizens, as well as the use of online spaces during the election period.

In preparation for the observation exercise, KICTANet held online and offline discussions on technological emerging issues. These included discussions during the Kenya IGF that brought together representatives from the electoral management body, the Independent Electoral and Boundaries Commission (IEBC), the regulator, the private sector and civil society. Some team members also attended training meetings organised by the IEBC, where they observed mock voting and transmission of results.

As part of its cybersecurity programme, KICTANet also conducted a cybersecurity and elections workshop in partnership with Global Partners Digital (GPD). The workshop reflected on the issues that came up during the elections. Some of the topics that emerged were the use of fake news by citizens and politicians, the hacking claims made by the opposition during the tallying of votes, and the capacity of the new cybercrime legislation to resolve these issues.

KICTANet continues to engage with the newly elected leaders, the elections body and other stakeholders on the use of fake news online, on cybersecurity and on the importance of digital rights in public policy processes.