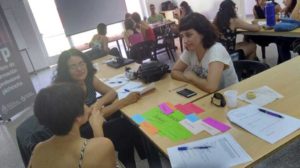 In 2017 Nodo TAU focused on the capacity building of local organisations to strengthen their digital rights, with the support of an APC subgrant. Between August and December they coordinated a series of communication workshops (Taller de Comunicación, or TACO for short) on digital skills for local organisations working on human rights, children’s issues, labour and health rights, gender, social economy and Indigenous communities, among others.

The TACO workshops involved eight meetings that were designed and planned together with six local organisations from the communications field: FARCO, the Argentine community radio federation; Sin Cerco, an independent press and photography agency; Sindicato de Prensa de Rosario, the local journalists union; ConX, a collective of journalists working on gender-sensitive communications; La Masa, a cooperative of journalists who head up a newspaper, a web agency and radio programmes; and Coopares, a cooperative working on digital tools for social and labour organisations.

During the workshops Nodo TAU focused on issues like communication, the internet and human rights; gender; abilities in writing and telling our own stories; audiovisual production; mapping local media, social networks and digital tools; independent media and the sustainability of independent communication projects. This initiative not only brought them closer to local communities, but also consolidated a network of local groups. At the end of November Nodo TAU organised together with ConX a Feminist Workshop on Digital Self-Defence, in the framework of the Take Back the Tech! campaign.