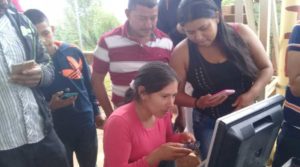 Thanks to support through an APC subgrant, Rhizomatica was able to support a number of emerging initiatives in Brazil and Colombia regarding community cellular networks. These are basically community-based networks that use 2G cellular technology as a way to facilitate communication between people.

The project took Rhizomatica to both countries in the final part of 2017. In Brazil they worked with Rede Mocambos and local authorities and community members in the Kalungas quilombola community to put up a small, local GSM network. They then travelled up north to Pará state to work with the Lasse project at the Federal University of Pará in Belem. Together they installed two new networks. Since GSM frequencies are heavily regulated, the networks did not go live until early 2018, when the Brazilian regulatory authority approved the experimental licences.

After Brazil they travelled to Colombia to work with another APC member, Colnodo, and the University of Cauca, on the implementation of a community cellular network in the Cauca region, with indigenous, Afro-descendant and campesino populations. The network has been installed, but once again the licensing issue remains unresolved, although it seems that things will be worked out by mid-2018.