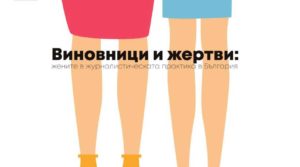 In October 2017, BlueLink held a roundtable with practising journalists, university journalism professors, media representatives and gender experts in Bulgaria, focused on women shaping journalistic practice in Bulgaria. It probed into the image of a woman journalist, the role of women in the professional journalism environment, problems and advantages of women in journalism, including violence, aggression and attacks against female journalists, the reporting of women’s problems in the media, and what could be done about all of these. The professional discussion was part of the project “Journalism by Women for Women” implemented by the BlueLink Foundation with the financial support of the Bulgarian Fund for Women.

The results of the roundtable were summarised in the publication “Victims and culprits: Women shaping journalistic practice in Bulgaria”. It identifies various professional challenges faced by women in the Bulgarian media. Female journalists often cover topics considered less prestigious, and face disparagement and gender-based online abuse. Even though they outnumber men in editorial newsrooms, female journalists do not seem to dominate media content, as women’s rights and issues are not highly covered. Change in public attitudes is seen as crucially needed to improve professional environments and media coverage in favour of women.