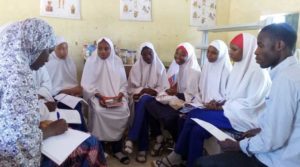 As the entry examination for tertiary education institutions becomes fully computer-based in Nigeria, most girls’ secondary schools in Kano state still do not have computer laboratories or internet access. Research conducted by the Centre for Information Technology and Development (CITAD) on a sample of girls’ secondary schools in the state established that the students lacked information and communications technology (ICT) skills, even though they have to write a computer-based examination to gain entry into universities. Nigeria has a National ICT Policy which includes an education component, but implementation of the policy remains a challenge across the country.

Of the students sampled for the research study, 84.6% admitted they do not know how to operate a computer; a further 10.8% are computer literate but had acquired their computer literacy at home, as their schools lacked such facilities; and 4.7% said they have internet access in their schools, but there is a lack of maintenance, teachers, power, etc. The study also found that awareness of ICT at the parental and societal level is low.

Having raised a number of concerns, the study made a series of recommendations, which included urging governments to equip female schools with ICT facilities and internet access, as well as to recruit enough qualified teachers. It also stressed the need for parents to encourage and support their female children in computer and internet usage, while creating awareness around measures for protecting themselves against cyberbullying. The findings of the research were gathered in a publication, Promoting greater access to internet for female students of secondary schools, which was produced with the support of an APC subgrant.

Image source: CITAD. Conducting a focus group discussion with students for the research.