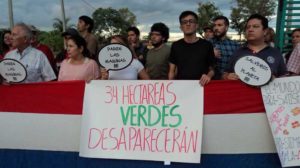 In January 2017, the Paraguayan Ministry of Public Works began to dig two large trenches, four metres deep, in Guasu Metropolitan Park, the last natural forested area in Asunción, claiming that these would serve to collect run-off from the stream that runs along the border of the park, in order to prevent flooding. In fact, what they were creating was a massive sewage reservoir.

Asociación Trinidad, along with a small group of civil society representatives, lawyers, journalists, environmentalists and engineers, began to research ways to stop the work. Using the Law on Access to Public Information, they discovered that the operation had not received municipal authorisation, and that the environmental permits had been improperly requested.

What began as the initiative of a small group of people who filed a complaint with the municipality to halt the work then moved to social media platforms, where protests and demonstrations were organised. A pivotal moment came when Asociación Trinidad director Arturo Bregaglio physically placed himself in the path of the bulldozers to keep them from entering the park, after the complaint filed had succeeded in obtaining a stop-work order. This act of defiance went viral, spurring the massive support needed for the cause. As a result, the deforestation of the park was suspended for over a year, while efforts are underway to have it declared a Protected Natural Area by the National Congress.