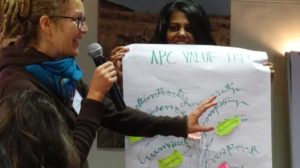 The APC network keeps growing! At the end of 2017, APC had 58 organisational members working in 61 countries, compared to 51 members in 60 countries in 2016, while the individual membership stayed at 28 members.

Nine new organisational members and two new individual members joined the APC network in 2017. This represents a record growth in one year, and reflects an increasing interest in APC membership.A highly engaged network participated in specific projects and in network-wide activities, implemented collaborations, provided input to policy advocacy processes, and took part in global and regional convenings and in capacity-building initiatives that contributed to the implementation of APC’s strategic priorities.

To watch out for: APC will hold its biennial regional member meetings in 2018, and organise several smaller member meetings at major events attended by the APC community.

Image: Conversation during the 2017 APC member meeting in South Africa, as captured by Arturo Bregaglio.