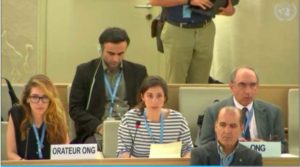 APC’s policy advocacy work in 2017 contributed to several resolutions that were adopted at the Human Rights Council and other UN bodies that reinforce human rights online and address emerging challenges.

These issues were taken up in the HRC resolution on privacy in the digital age, the UN General Assembly Third Committee’s resolution on human rights online for human rights defenders and the safety of journalists, and the Report of the United Nations High Commissioner for Human Rights on ways to bridge the gender digital divide from a human rights perspective, which reflects APC’s framing of the issue and puts forth recommendations aimed at advancing women’s rights online.

APC also spoke at the opening ceremony of the WSIS Forum, presenting civil society concerns over insufficient focus on human rights and people-centred development in the WSIS follow-up process and highlighting that governments are not including civil society at the national level.

To watch out for: In 2018, APC will continue to collaborate with its members around a number of key internet-related policy spaces, including the Human Rights Council, RightsCon Toronto and regional forums.