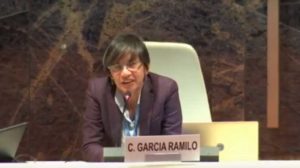 “Queer and LGBTIQ bodies make a difference on the issue of access. Also at the point of data collection in exchange for access it must be noted that technology is not neutral and comes from a specific place of power. What are we doing with our privilege?” – valentina hvale pellizzer

Although topics related to gender have been part of the debates at the global Internet Governance Forum (IGF) from the beginning, it was the 2017 IGF, held on 18-21 December in Geneva, that included a main session on gender for the first time ever. Under the title “Gender inclusion and the future of the internet”, this main session aimed to foreground a discussion on gender and internet governance and policy, providing a space for stocktaking and discussion on key issues and challenges that have emerged, and making recommendations for ways forward.

Bishakha Datta, chair of the APC Board of Directors and executive director of APC member organisation Point of View, was one of the main session’s moderators, and emphasised “the need to actually go much deeper when we talk about gender and internet governance, right to the roots of patriarchy.”

Another speaker at the session, UN Special Rapporteur on the promotion and protection of the right to freedom of opinion and expression David Kaye, addressed the fact that efforts to combat gender-based violence are often seen as competing with concerns related to freedom of expression. He referred to ongoing efforts spearheaded by APC to find commonality between the two and to establish that promoting freedom of expression and fighting gender-based violence can indeed go hand in hand.

APC executive director Chat Garcia Ramilo focused on what needs to be done in order to take gender and internet governance to the next level, emphasising APC’s efforts at pushing for gender to be constantly and consistently discussed in internet governance spaces at all levels, and referring to the effort to integrate the Gender Report Card at IGFs since 2011.

Another highlight with regard to gender at the IGF was the Best Practice Forum (BPF) on Gender and Access, moderated by APC’s Women’s Rights Programme manager Jac sm Kee. This was the third year of work for this BPF, which focused online abuse and gender-based violence in 2015, and on gender and access in 2016. In 2017, the BPF dealt with gender and access once again, but focused on specific communities of women: women with disabilities, refugee women, young women, elderly women, LGBTIQ women, women in rural areas and indigenous women.

A survey developed by the 2017 BPF that involved these various sub-groups brought out the specific needs and challenges in social and economic development facilitated by internet access. Connecting with the community, accessing information, and promoting educational opportunities were some of the key needs for the various sub-groups. The survey also highlighted lack of infrastructure, insufficient local and relevant content, and social and cultural norms as major hindrances to internet access for these sub-groups of women, as well as stressing the need for gender-focused policies and sustainable grassroots-level initiatives to enhance inclusivity.

Finally, the BPF and its panel discussed the BPF’s preliminary findings and recommendations for further exploration, and the ways in which stakeholders can support the work in addressing barriers to meaningful access faced by specific communities of women.