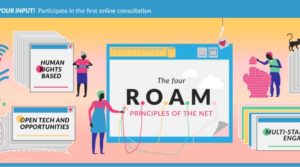 In 2015, UNESCO put the concept of “Internet Universality” at the heart of its work to promote an internet that works for all. In June 2017, UNESCO launched a year-long programme of consultation to develop a set of Internet Universality Indicators, covering four fundamental principles (rights, openness, accessibility and multistakeholder participation) and the cross-currents between them.

The work on the project to define Internet Universality Indicators was led for UNESCO by APC on behalf of the Internet Indicators Consortium, which includes, apart from APC, ict Development Associates, Research ICT Africa, LIRNEasia and DIRSI.

Consultation with stakeholders played a central part in developing the indicator framework, as well as making the questionnaires available in all of the six UN official languages (Arabic, Chinese, English, French, Russian, Spanish). The first phase of consultation, from June to October 2017, was concerned with broad principles and ideas for the framework as a whole. The second phase, from December 2017 to March 2018, was concerned with specific indicators. Towards the end of 2017, a draft set of options for specific indicators was published, and stakeholders were again asked for their views on these.

To watch out for: In 2018, the final development of the Internet Universality Indicators will be made public.