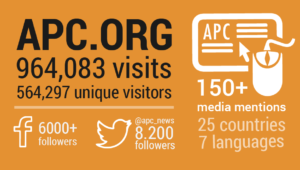 Our main website, APC.org, which we redesigned to better reflect our organisational structure, strategy and overall goals, had 564,297 unique visitors and 964,083 visits during 2017. The highest peak happened between October and November, coinciding with the preparations and celebration of the global Internet Governance Forum (IGF), the Forum on Internet Freedom in Africa (FIFAfrica), the UNESCO Internet Universality Indicators consultation and the publication of our previous Annual Report.

APC was cited by the media 150 times in 25 different countries and in seven languages (Spanish, French, English, Dutch, Russian, Portuguese and Japanese) and by 36 academic references. A prolific content partnership with Rising Voices increased the outreach of stories coming from APC members to a broader community of activists.

On social media, APC had a considerably more consistent Facebook presence than the year before, surpassing 6,000 followers by the end of 2017, which means 850 new followers were gained. Our main Twitter account, @apc_news, had 8,200 followers in English versus 6,120 followers the previous year, which amounts to 2,080 new followers gained in 2017. The highest peaks coincided with the IGF 2017, the launch of a global survey on sexual rights and the internet, and the UNESCO consultation on Internet Universality Indicators.

Our flagship Twitter account on campaigning for women’s rights online, @Takebackthetech, had 6,188 followers at end of 2017, which reflects 1,191 new followers gained over the course of the year, with the highest peak coinciding with the “Distributed Denial of Women”, an online strike of women working in tech.

APC reached its 270th newsletter, with a total of 13 editions of APCNews sent in 2017 (in English and Spanish). GenderIT.org launched four special editions of its newsletter, including one highlighting the findings of the EROTICS research – carried out in three countries in South Asia – and the EROTICS global survey of sexuality and internet activists. APC also launched a new thematic newsletter focusing on community networks, with the first edition sent in December 2017.

To watch out for: A communications welcome kit dedicated to our network members, especially new organisational and individual members who need to know how to easily navigate APC online spaces, will be produced in 2018. Also stay tuned for a trilingual newsletter featuring a mash-up of our content in different languages.